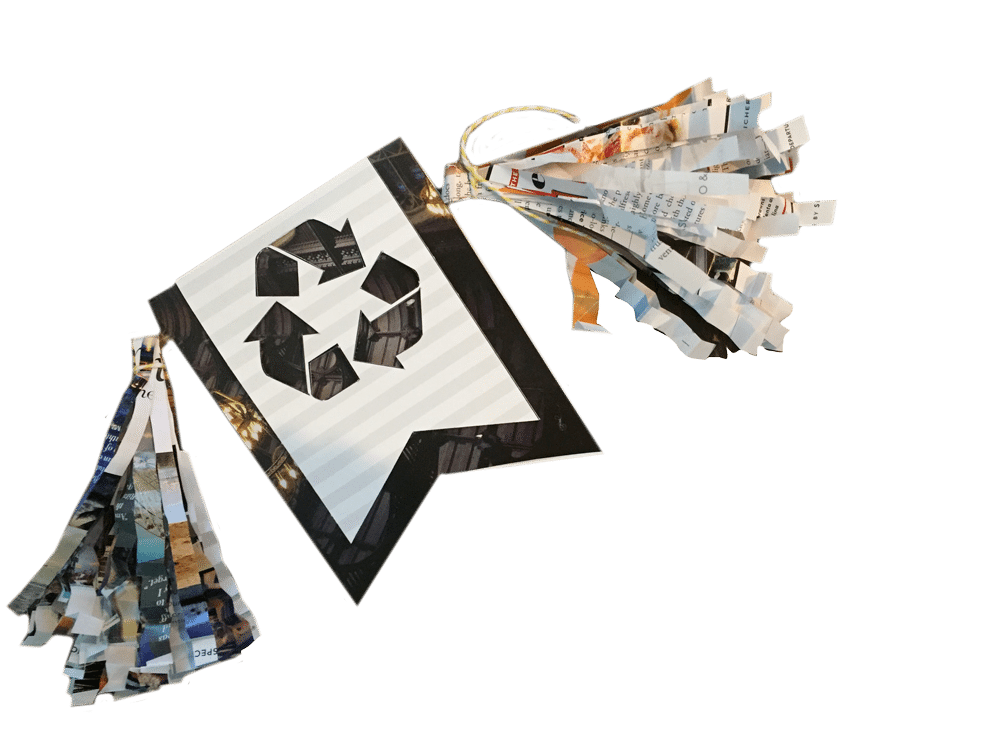 The History of Earth Day

Our recycled magazine banner will help celebrate Earth Day. Earth Day was created in 1970 as a day of education about environmental issues. The founder was Senator Gaylord Nelson from Wisconsin who wanted it to be a mass environmental movement. He was inspired to make change after witnessing the massive 1969 oil spill in Santa Barbara, California. It began as a national teach-in on campuses across the U.S. April 22 was chosen as the day in order to maximize the amount of student who could attend. The events were co-organized by Congressman Pete McClosky and Harvard student Denis Hayes.

In the 1990’s, a group of environmentalists asked Hayes to organize another campaign. He created Earth Day 1990. Earth Day 1990 gave a huge boost to recycling efforts worldwide and helped pave the way for the 1992 United Nations Earth Summit in Rio de Janeiro.

Denis Hayes and the 1990 Earth Day Rally in Washington, DC.

It also prompted President Bill Clinton to award Senator Nelson the Presidential Medal of Freedom (1995)—the highest honor given to civilians in the United States—for his role as Earth Day founder. And the Earth Day Network was born and has been continuing to bring the message of environmental protections and issues to the masses with Earth Day every year.

Celebrate with a Recycled Magazine Banner

In honor of the celebration and protection of the earth, have a great DIY recycled magazine banner to help make a great statement in your school, office or home.

First, find pages out of magazines that have a lot of the same color, and tear them out. If you want your banner to have a uniform color, try to find pages of all that color. You will also need our template and printable.

Then fold the page in half and line the flat end of the template to the edge of the fold and trace the shape. Then cut out. This creates a double piece. Do 10 of these for the banner 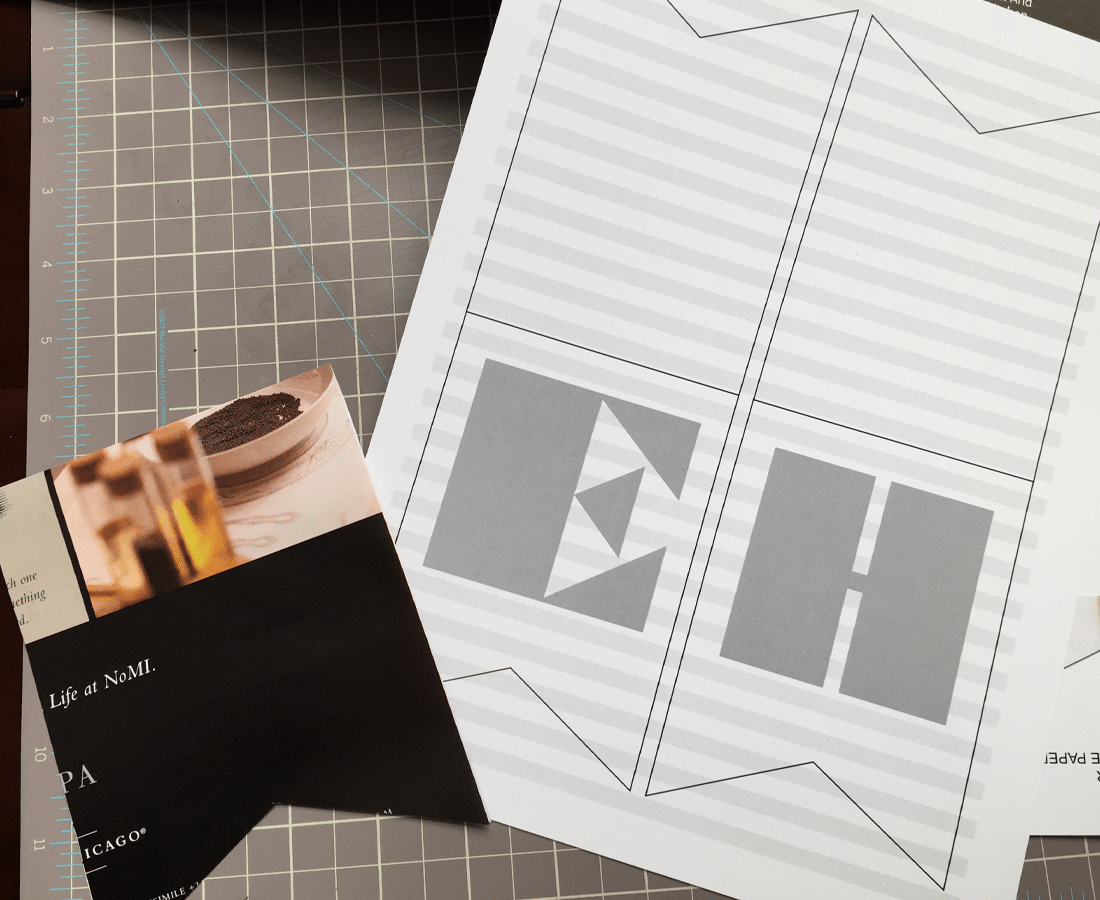 Then after printing out the printable – cut out the banner pieces. Also, cut out the letters on each piece. This will allow the color of the magazine paper to pop through.

Then you will glue all the pieces in place – making sure that through the top middle part – you can string a piece of string through.

That gets you your words for the recycled magazine banner. Now you all need is your tassels. In fact, the tassels are are cute just by themselves.

The tassels are pretty simple. Tear our pages from a magazine or use old wrapping paper. Cut long strips – all the same width (like a .25 of an inch) and same length. Using a whole page from a magazine will get you the amount that you need. 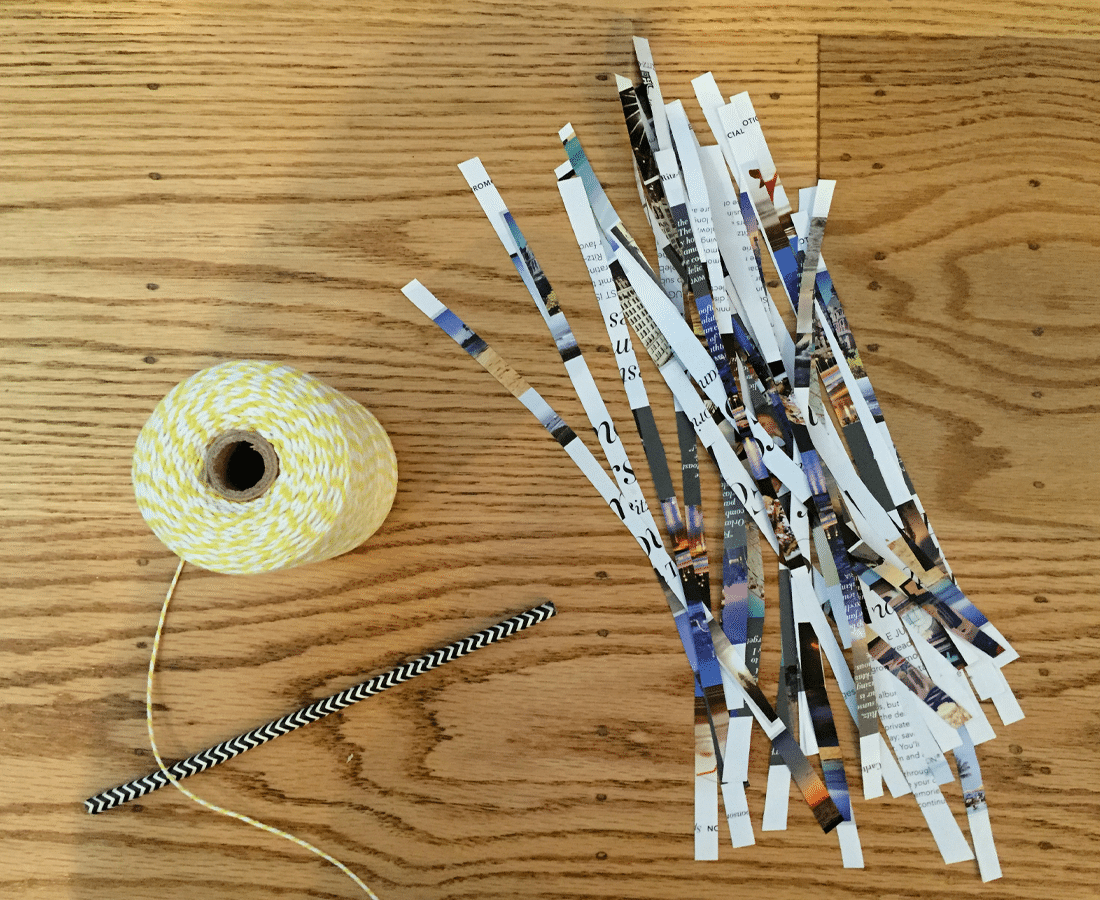 Organize the strips in a stack and fold in half. I used a paper straw to fold it over – you could use a pencil. Then gather the paper together over the pencil and tie it off with a piece of string – the pencil will create a round hole for string to go through. Pull the pencil out…. 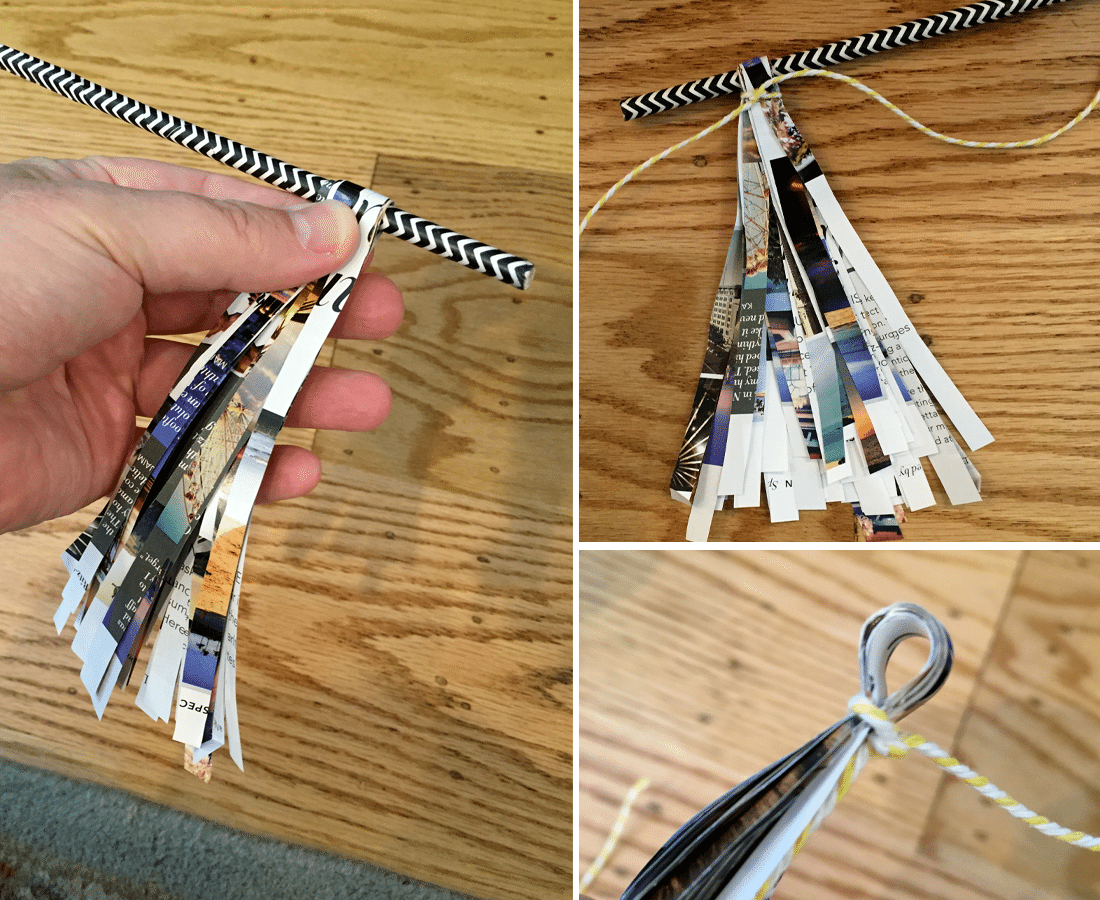 Then take the end of each piece of tassel paper and crimp. Folding in a zig zag pattern or accordion style will give the paper some dimension. Now repeat this to create 12 in total. 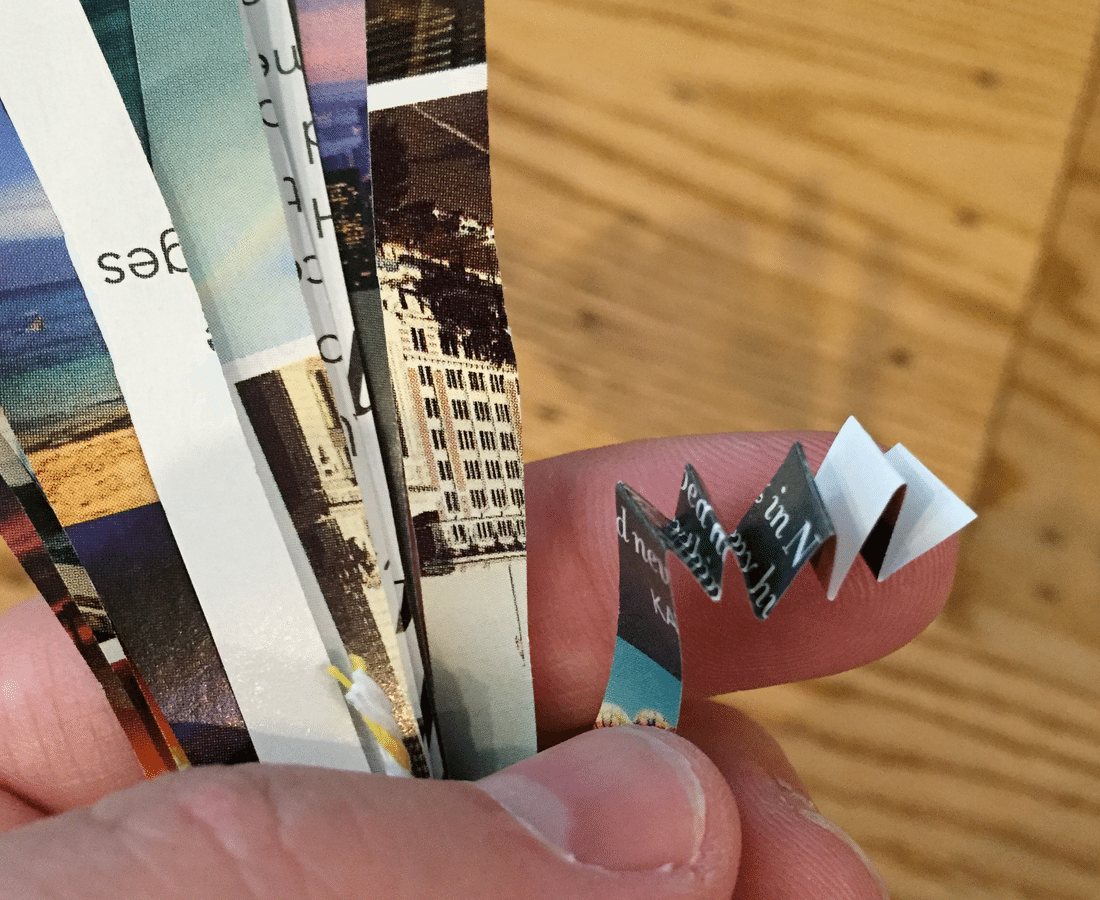 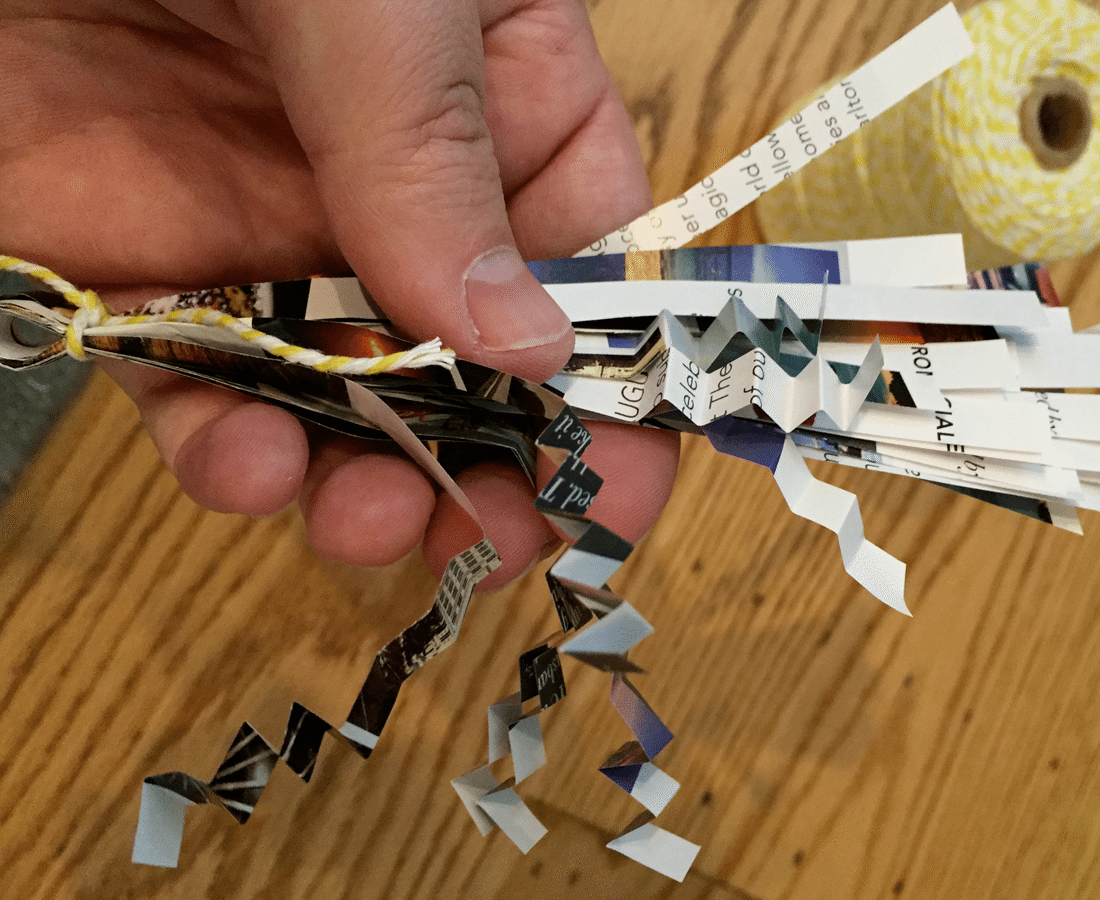 Then one by one, string the banner together.