Disney has always revolved around its princesses and for good reason – they do keep the lights on.  What about the fellas though?  Here’s a quick ranking of the dashing lads of the Disney universe.  That’s right, here is my list of all Disney princes: zero to hero.  For our purposes, we’ve looked at five essential prince qualities: Sense of humor, Intelligence, Self-involvement, Resourcefulness, and Talents.  We also give each Prince an alternate occupation because we are hilarious.  So without further ado, all disney princes: zero to hero.

Prince Florian (The Prince) Snow White and the Seven Dwarves. 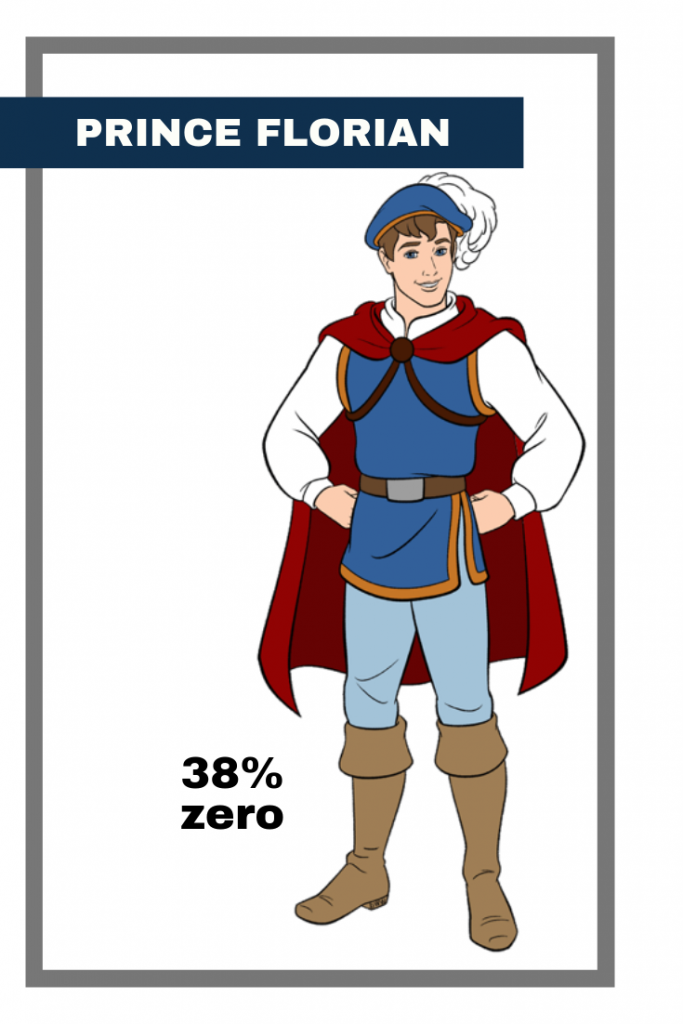 Sense of Humor – Unless singing alone counts as funny, Prince Florain is low on this scale.
Intelligence – We know he kisses unconscious women which ranks pretty low in the “brains” category.
Self-involvement – The man rides alone, so he’s either James Dean or smells pretty bad, so it’s unclear.
Resourcefulness – Well this prince either has a masters in spell breaking, or he’s a creep. The one thing we know is that he didn’t take her pulse or check her vital signs. Nor did he seem to recall any medicine men in the area, so I’m giving him low marks here.
Talents – He can carry a tune. That’s for sure. He’s also quite a kisser which I hear is a plus in the Prince business.
Alternate occupation – Kissing both seat filler 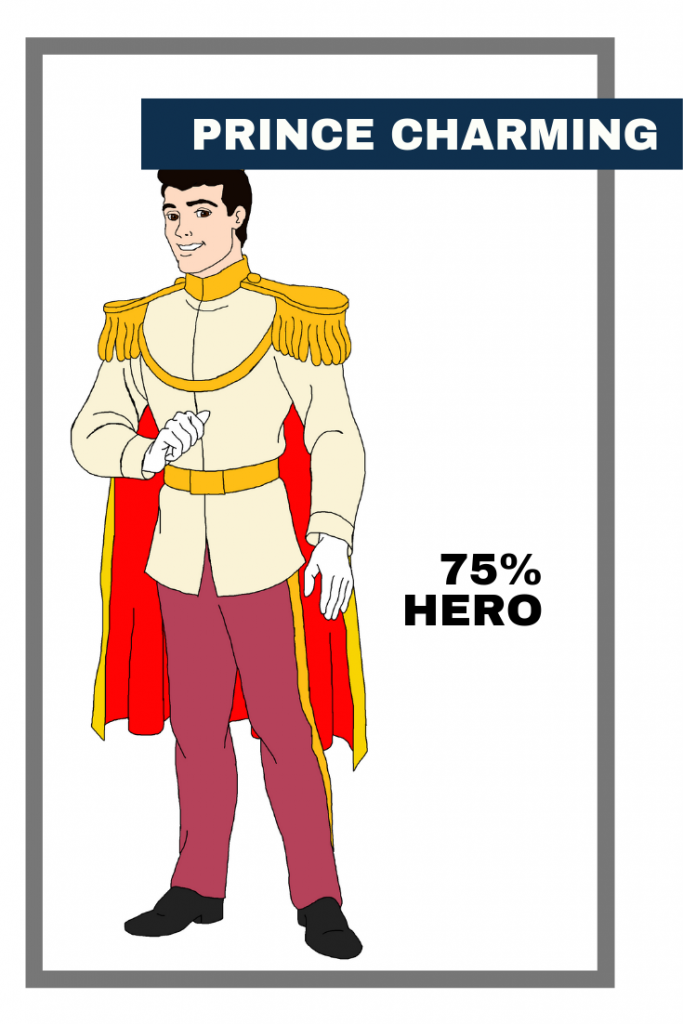 Sense of humor – I mean come on. The guy goes on an exhaustive search for a girl he met once and only has a glass slipper to go on. That kind of patience needs a pretty decent sense of humor in my book.
Intelligence – Prince Charming has got to have a pretty good noodle because he saw through the gaggle of eligible suitors to find the diamond in the rough… even if she is all magic’ed up.
Self-involvement – This is a tough one, but I think he’s on the low side here. Charming has always struck me as a patient fella who’s been looking for the right person to share his hopes and dreams. That person just happens to be a scullery maid.
Resourcefulness – He found a woman with a shoe so…high marks.
Talents – Besides patience and persistence, Charming can certainly cut a rug.
Alternate occupation – 40’s Gumshoe or FBI agent 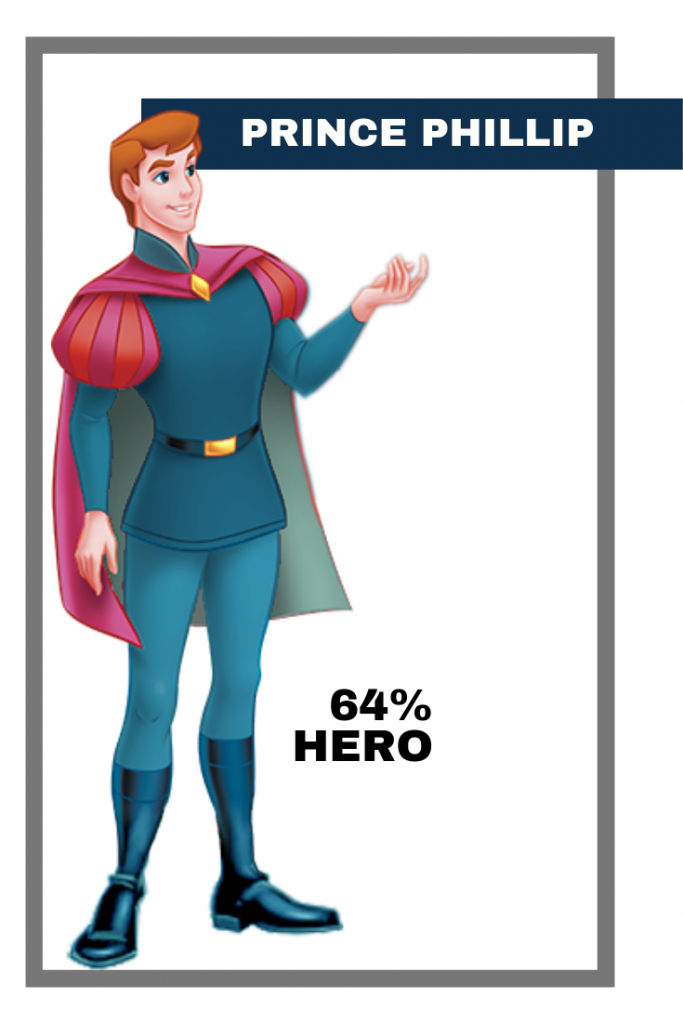 Sense of humor – If you can’t laugh in the face of perilous odds what can you laugh at? This dude has to fight a freakin’ dragon for the person he loves, so I’m guessing he knows a couple of jokes. You know, to keep it light.
Intelligence – Bravery doesn’t always translate into brains, and the guy is risking his life for a woman he barely knows so the jury is out on this one.
Self-involvement – Phillip seems pretty giving. He does marry Aurora in the end, so his intentions seem relatively selfless when deciding to face Maleficent.
Resourcefulness – Phillip has a sword, a horse and a prayer. He still finds a way to beat a sorceress who changes herself into a dragon so that counts for resourcefulness I think.
Talents – He can ride a horse, swing steel, fight with the best of them and can smooch like a champ. Not a murder’s row of talents but they did the trick.
Alternate occupation– Rodeo Cowboy or Medieval Times employee. 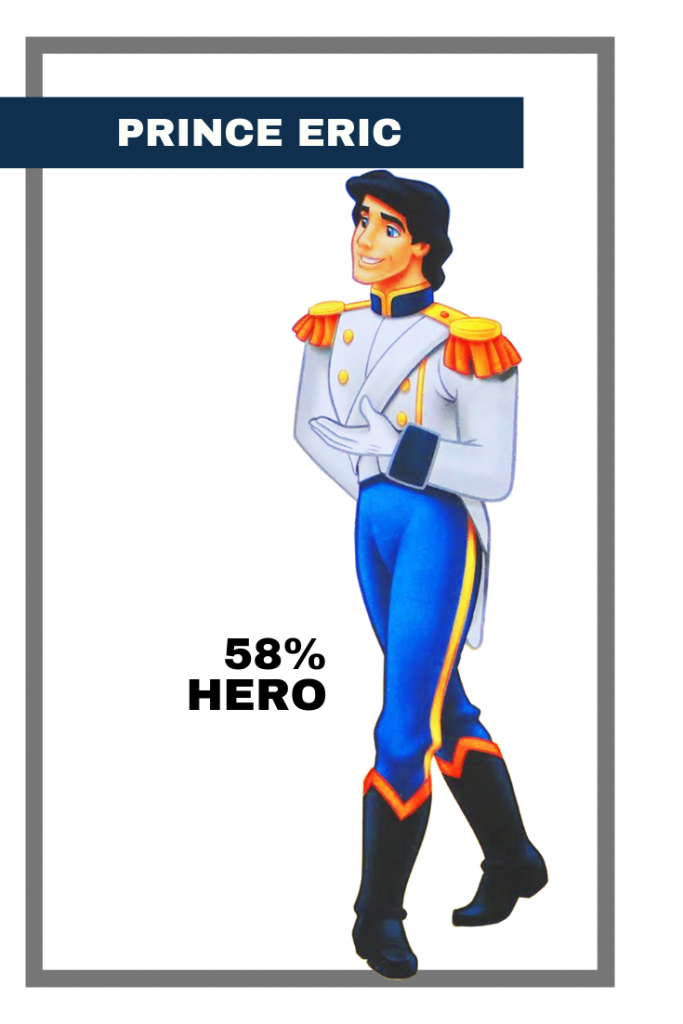 Sense of humor – Eric likes messing with Grimsby and the rest of the sailors so I think we can safely assume that he a funny bone.
Intelligence – Eric might be kind of a dumb dumb. He’s all up in Ariel’s business until Ursula shows up with Ariel’s voice and he’s like “squirrel!” After that, he’s pretty easily brainwashed, so I’m docking him in this category.
Self-involvement – Eric generally seems to care about the people around him. He never comes across as overly self-involved. Decent marks.
Resourcefulness – Eric gets above average marks for being responsible for the Ursula kabob at the end. It could easily have been a fool’s errand, but he was brave/ smart enough to try it.
Talents -Prince Eric is a good sailor, a good dog owner, and an above average swimmer. He is also a connoisseur of fine vocal performances.
Alternate occupation – Deadliest catch captain or Vocal Arts philanthropist

Prince Adam (The Beast) Beauty and the Beast 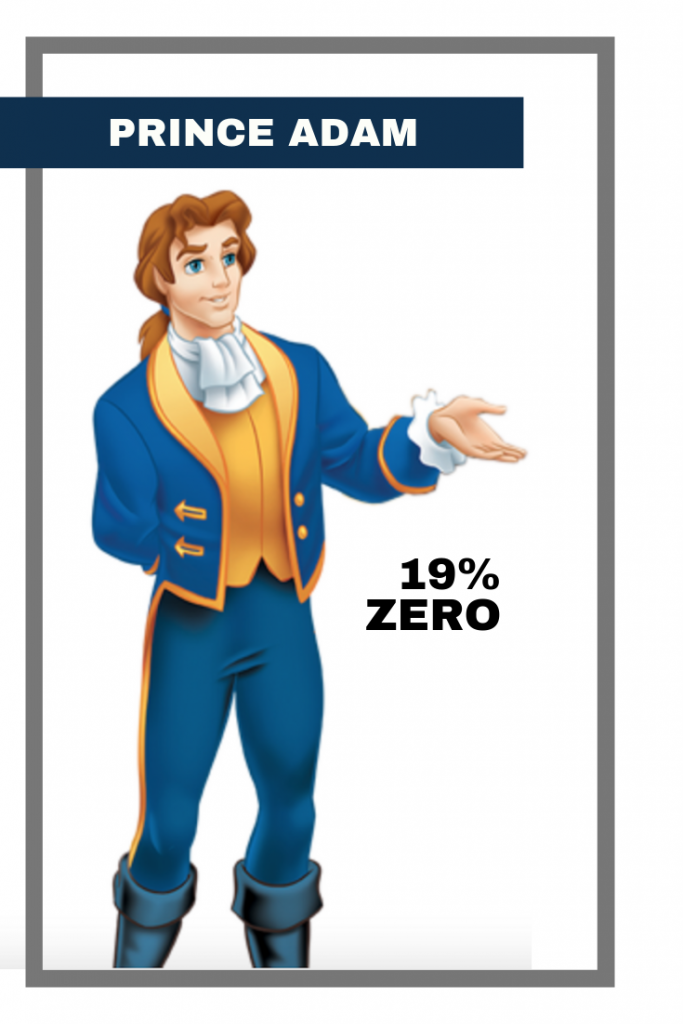 Sense of humor – Prince Adam has no sense of humor which is comical because his situation is pretty funny if you look at it in the right way. I mean the dude is a huge yeti looking m’effer and his friends consist of housewares. If he had a sense of humor after being cursed, he would have been like “oh geez…you really zinged me with this beast transformation. What you did to my friends is a laugh riot as well.” Instead, he just got super pissed.
Intelligence – Adam ain’t so bright. He needs to find true love so it would behoove him to network as much as possible. What does the beast do when Maurice stumbles into his castle? He locks his ass up. Then he lets him go and locks his daughter up. Were it not for Belle being so incredible (except in her taste in men) he would have been screwed. Dumb dumb.
Self-involvement – The beast could give a fuck about anyone else until Belle saves him.
Resourcefulness – Beastie gets pretty low marks her as well. Does he pack up his inanimate object friends and hit the road in search of that which might save them all? Nope. Dumb dumb sits around being pissy and forgets how to eat soup properly.
Talents – He can kick ass when prodded and brood better than a sullen teen who just discovered Joy Division.
Alternate occupation – Singer for a punk rock band or internet troll. 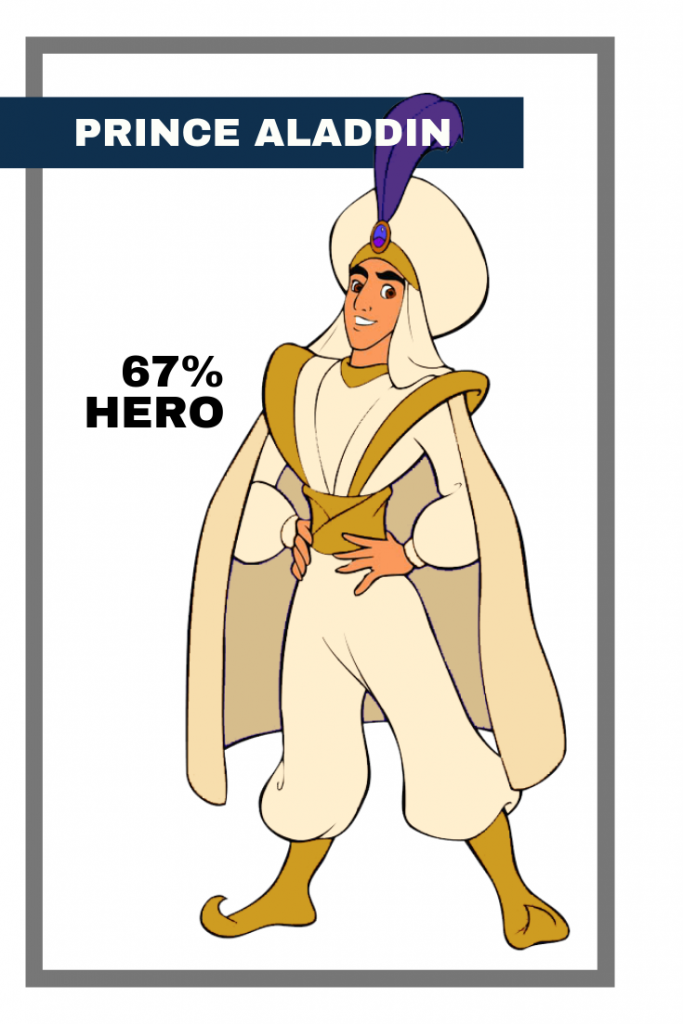 Sense of humor – Aladdin’s best friend is a monkey, so yeah, he’s funny.
Intelligence – As far as street smarts, he’s a genius, but I don’t think he’s reading Chaucer if you know what I mean.
Self-involvement – He’s a bit self-involved but only because he has to fight for everything he has. His best friend’s a monkey as we mentioned, so it’s hard to blame the guy. He’s lonely.
Resourcefulness – He’s penniless, yet he doesn’t seem to miss a meal. He also finds a magic lamp, which is a get, and does parlay that lamp into a pretty sweet magic carpet ride.
Talents – Aladdin can pick a pocket like no body’s business. He is wicked awesome at parkour as well. I wouldn’t say he’s a master of disguise, but I’ll give him props in that category as well.
Alternate occupation – Movie stunt double for Rami Malek or street magician.

Prince Naveen – The Princess and the Frog 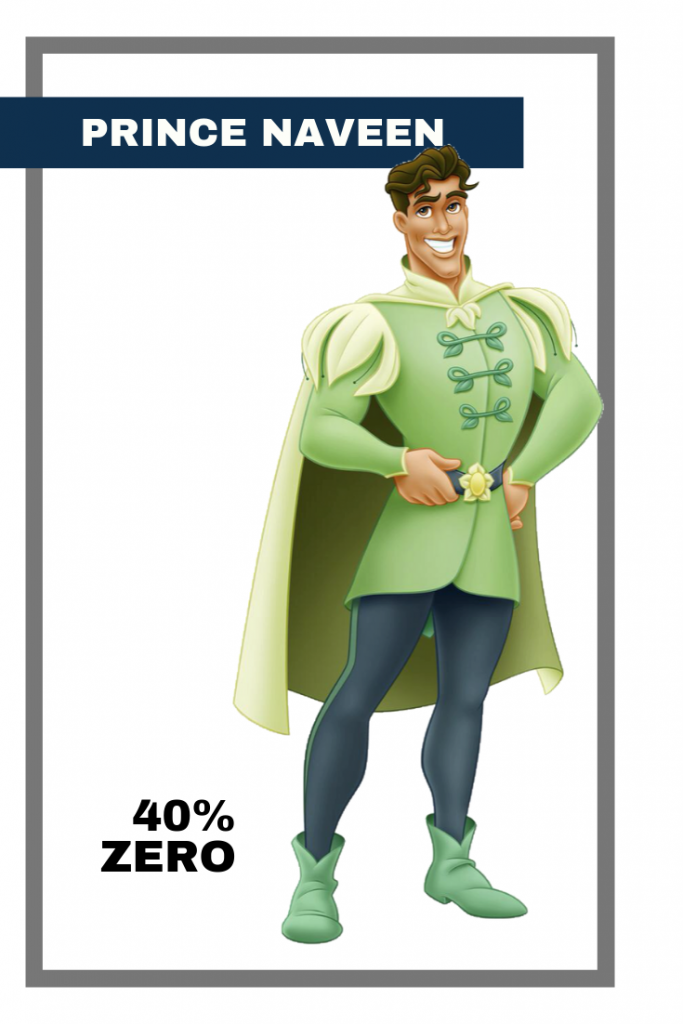 Sense of humor – Naveen is undoubtedly a “good time Charlie” and thus you can assume he’s got a pretty decent sense of humor. What’s unclear, however, is whether its a Frat boy sense of humor or something more substantive.
Intelligence – He fell for the adult version of “hey kid, I have some candy in my van. Want some?” So no, he’s not the brightest bulb.
Self-involvement – Until Tiana saves him, this prima donna is entirely self-involved.
Resourcefulness – Naveen isn’t that resourceful. His entire plan is to have Tiana kiss him. When that plan goes tits up, he’s just a frog with a ukulele.
Talents – If spending your wealthy parent’s money is a talent than Naveen is super ass talented. He can also most likely do keg stands with the best of them and, as mentioned before, he can play the ukulele. So can my eleven-year old’s best friend but I’m not judging.
Alternate occupation – seven-year college drop-out or future barfly. 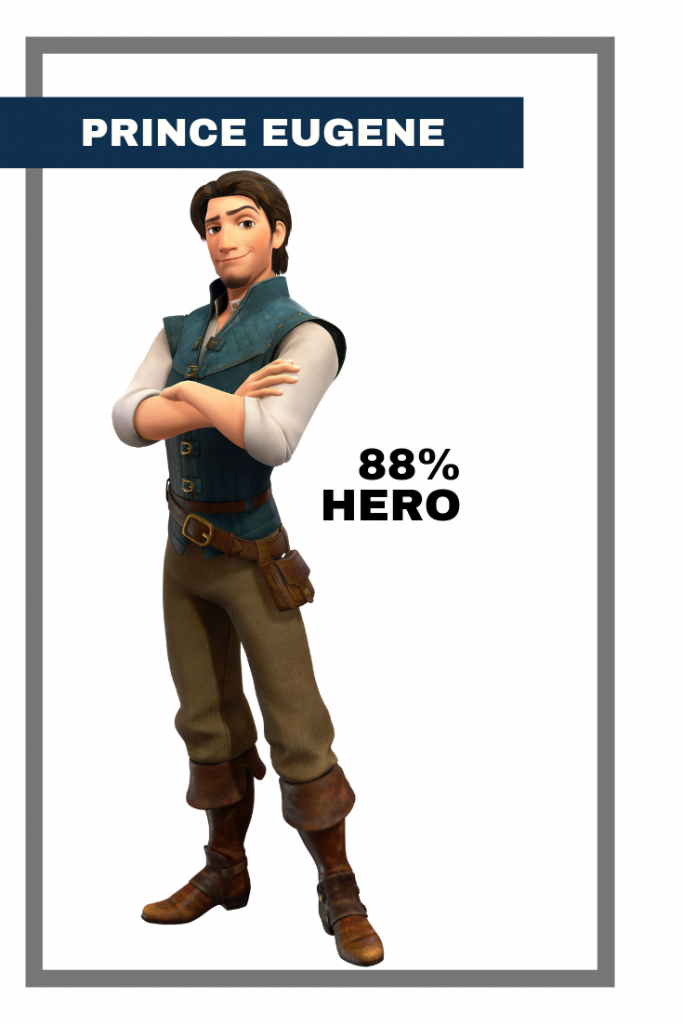 Sense of humor – Eugene is stand-up comedy level funny.
Intelligence – Like Aladdin, his street smarts are off the chart. As for book smarts, when it comes to Flynn Rider, who needs them. He did grow up reading a lot of books about swashbuckling…so we know he can read.
Self-involvement – Eugene is entirely self-involved and remains so until Rapunzel shows him how not to be. His hard-luck back story gives him points to the positive as well.
Resourcefulness – Using his gift of gab, he has a relatively easy time getting whatever he wants. He also fends off a regiment of soldiers, including their sword-wielding horse, with a frying pan. That is resourcefulness personified.
Talents – Mr. Fitzherbert can sell ice to an Eskimo and most likely free climb El Capitan. He can probably make a mean omelet as well.
Alternate occupation – regular 10 pm. slot at The Comedy Store or used car salesman. 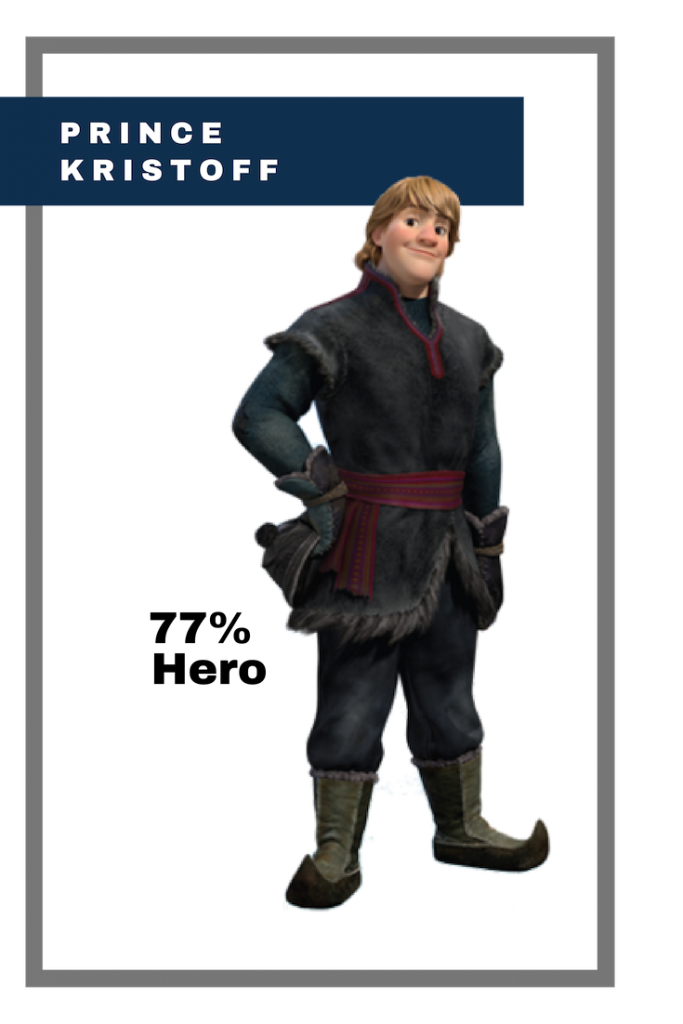 Sense of humor – His best friend is a reindeer  and he likes to talk with bunch of rocks, so he’s either hilarious or mad as a hatter.
Intelligence – He has an emotional intelligence but isn’t that street smart. In the woods, however, he can hold his own.
Self-involvement – For a guy who has spent the majority of his life in the company of nonhuman companionships, he’s incredibly not self-involved. He’s the kind of fella who will help you move for a bunch of root vegetables.
Resourcefulness – Kristoff is brave and has a great heart. Unfortunately, he’s not that resourceful. When the magic snowman outdoes you in this category, it’s not a good sign.
Talents – Kristoff can make ice, drive a sleigh and communicate with reindeer. He’s a Nordic Santa clause without the toy obligations.
Alternate occupation – Owner of his a shave ice franchise aptly named Anna’s Cold Bananas – he only has the one flavor. He would also be a reasonably decent chair lift operator in an 80’s comedy. He’d be the geek with a heart of gold. 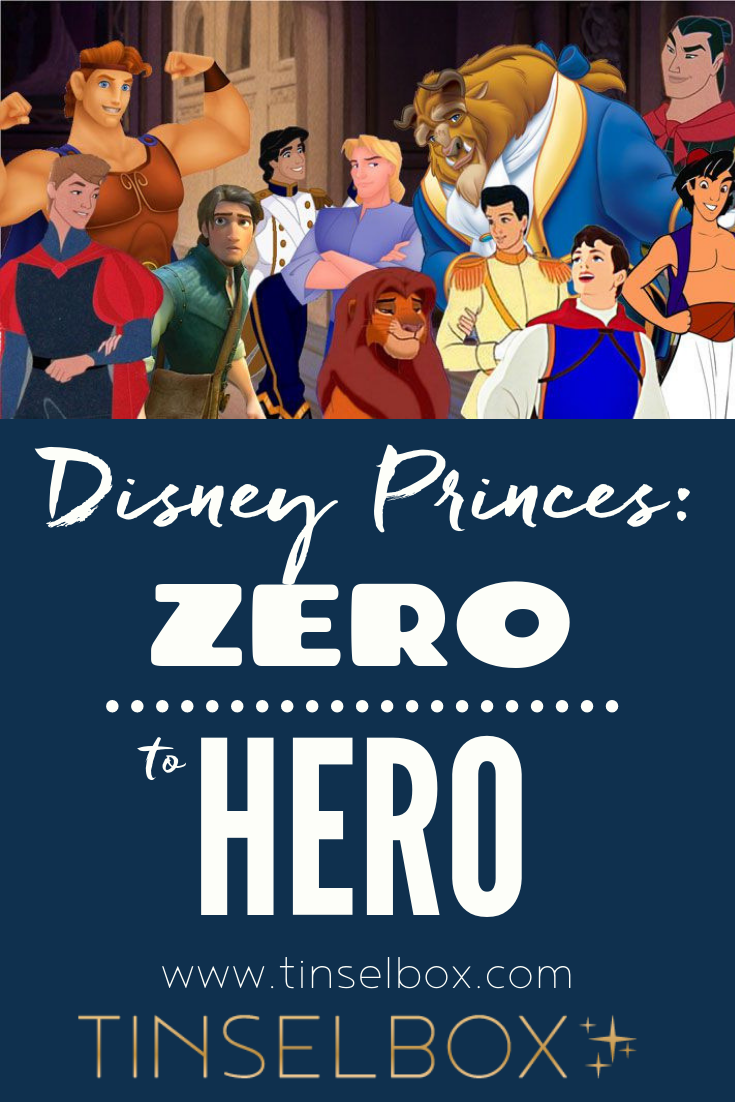 Best Scary Movies of All Time